With a rise in social media users sharing their lingerie collections online, the topic of transparency has become a hot one. Those who seem to have a never ending lingerie budget post selfie after selfie of new sets almost every other day, leaving many of us to wonder what how in the hell they can afford it (if anyone knows hit me up ’cause I sure as hell need to get into that career path). Lingerie Detective and The Holy Brail have covered the topic of transparency on their blogs, both admitting that viewing such images leads to the feeling of not being good enough. Personally, I’d hate for people to look at the minuscule amount of my life that gets put online and view it as a standard to live up to. After a discussion on Twitter with Write Me Bad Checks and Technicolor Lover, I decided it was time to be transparent about my buying too.

My collection began to expand just over two years ago after the break down of a long distance relationship. After moving home from uni, I was unsure what to do with my life and ended up working as a sales assistant. Working 30hrs on minimum wage and the regular trips down south to visit my ex meant I mostly bought underwear from the likes of Topshop and H&M. I had always admired beautiful lingerie but my crippling insecurities about my body had lead me to believe lingerie wasn’t for a small busted woman like me. The day the relationship ended I used the money I had saved to buy a train ticket to buy myself a pair of Carrie Briefs from Hopeless Lingerie instead. They were my first real taste of quality underwear. This, combined with discovering the online lingerie scene and my correct bra size, I became hooked. Lingerie made me feel confident and buying new pieces gave me a short burst of joy while I was recovering from having my heart broken. I became addicted to the feeling. My collection expanded rapidly but I wasn’t fussy where I bought from. My lingerie drawer ended up a mish-mash of cheap high street pants and a handful of luxury pieces. Soon thereafter I was promoted at work to Visual Merchandiser and began to earn a salary. While I wasn’t making mega bucks by any means it was the most money I had ever earned in a job and I used this to expand my collection even further. 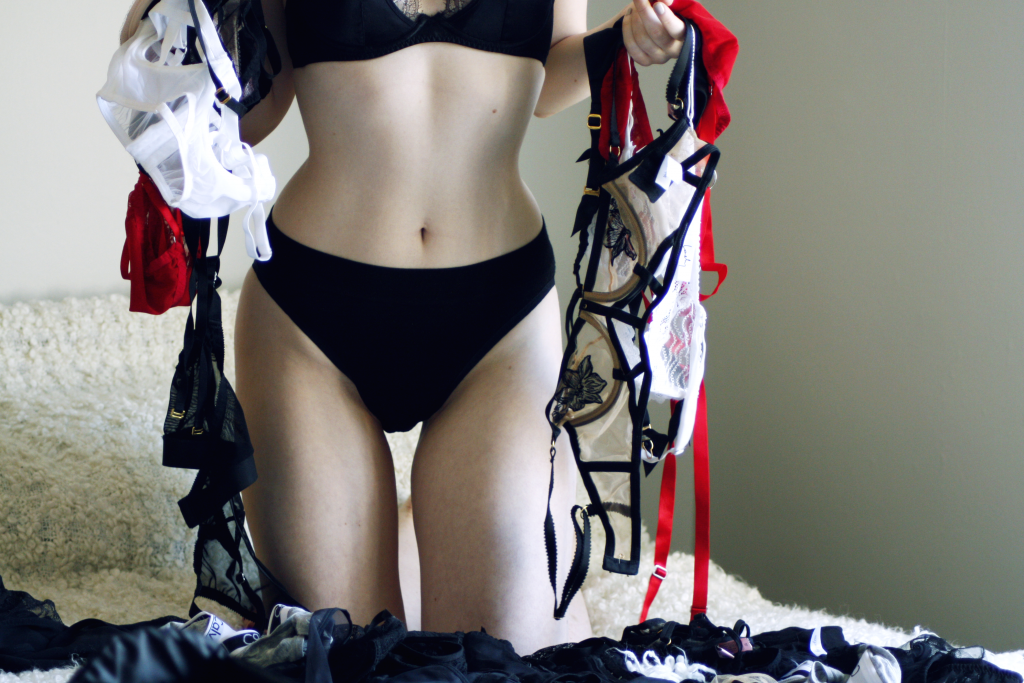 Gradually I came to realise that I was using lingerie as an emotional crutch. I also became more interested in the ethics of where my lingerie came from. Having already amended my clothes shopping habits, purging my outerwear to make way for a capsule wardrobe of quality pieces, I extended the process to my underwear. Impulse buys that weren’t being worn were cleared out and I re-evaluated what I wanted from my collection. Now I’m buying less and trying to curate a collection of beautiful pieces I truly adore instead of just owning something for the sake of owning it. And of course, buying items I will actually wear is the obvious sensible option. Delicate fabrics, suspenders and stocking are not items I can wear on a day to day basis because of my job and so there is no point in wasting money on such items. On Pinterest I’ve created a Wish List Board and won’t allow myself to deviate from it, no matter how tempting the sales are. Blow out purchases must be easy to layer and wearable as outerwear.

My salary is modest but I still live at home because until a recent update in my salary, I couldn’t afford to move out. Now I can but other life circumstances make it difficult. I try to keep my outgoings as minimal as possible. Partying all weekend and spending large chunks of my wages on nights out has never really appealed to me. While alcohol may be fun, I’d much rather use the money for underwear, which I find much more enjoyable. I have no car, instead buying a monthly bus pass to travel on. I have not had children. I use no expensive gym membership. Other than Netflix (which I share with my sibling) no other monthly subscriptions for things such as magazines leaves my account. Luckily I’m relatively healthy and don’t have to pay out for medical care. Each month I give myself a fairly strict budget for clothing and lingerie, though I don’t often buy clothes. Sometimes I have to wait up to several months in order to save enough to purchase a particularly expensive set in full but the anticipation makes it much more worth while. Being able to wait proves to myself that I genuinely love the set and not just buying it for the sake of buying it. Overall I live within my means and encourage others to do the same. Remember, there is a difference between a need and a want and there is no point in decimating your bank account for the sake of a want. One of the unfortunate sides of social media is competitiveness and I implore everyone to remove those who make you feel like you must live up to a certain standard from your online life (and your real one too). They show such a tiny amount of their lives online and for all we know they might have gotten themselves into a shit tonne of debt in order to keep up with other accounts. Personally I would like to see more transparency from all, even if it’s just stating they work a job with a fantastic salary or receive many press samples.

If you wish to see my collection or how often I add to it, I have a board on Pinterest. Items that were on discount or given as gifts are stated as such, to give a realistic idea of how much I spend.

Update // Where I’ve Been